In continuation of promoting the United Nations eight millennium development goals, the international circle of faith chaplaincy corps (ICOFCC) in commissioning her 55 newly recruited members in Yola, Adamawa State of Nigeria in a series of activities from 4-15 June 2014 tagged her peace parley seminar “ PEACE A PIVOTAL TO SUSTAINABLE DEVELOPMENT” the peace parley attracted several people from different works of life, religious and opinion leaders, security personnel, community leaders and some government top functionaries. Free medical assistance was administered to several sick people make up of both old and young people in Bwaranji community of Yola.

INTRODUCTION: The man that knows you so well and yet is willing to keep your relationship often at personal sacrifices is your friend. The one who knows where you hurt, yet he can touch it without rubbing it in is also your friend. Friendship is a level of relationship based on experiences, so is peace, a character molded by knowledge.

Websters’ dictionary defines peace as a state of quietness and freedom from contention, disturbance, or war; ease of conscience or of the mind. From the above definition, there are few places on earth enjoying peace as at today. In fact most people on our roads are not at peace with themselves or with somebody else.

Peace is a spiritual force, you cannot see it with your eyes yet you know when it is not there. In some places, the influence of peace is very strong and it shows on the people. In some other places the influence is mild and so there is tension even when there is no identifiable conflict. It is therefore dynamic such that communities under its influence hardly organize safety or security measures.

WE MUST HAVE PEACE, BUT HOW!

“Peace I leave with you, my peace I give to you; not as the world gives do I give to you. Let not your heart be troubled, neither let it be afraid”. The world gives peace, religion gives peace to its adherents, but the ultimate peace is from God. By looking at how a community is flowing in harmony or boiling in conflicts one can easily understand the content and brand of peace that is prevailing there. Everyone therefore can hold on to the word “peace” but by their lifestyle the truth is known from error.

2. Those who have received peace must give it to others. It is a spiritual law that says that what you sow, you also reap. However, sowing goes as seeds but reaping comes as harvest. The quantities are different.

All over the world, children appreciate gifts. A gift tells a child that you are pleased with him. In fact he understands it to mean love. Adults may not be disposed to accepting a material gift from a stranger but a word that contains an answer to a challenge is welcome. Then give it with a selfless motive. So the onus is on those who know peace to explore the best way to pass it on to those who don’t know much of it despite their differences. So we must build human communication bridges that are adapted to individual challenges, family challenges and community challenges.

“For he who would love life and see good days, let him refrain his tongue from evil, and his lips from speaking deceit. Let him turn away from evil and do good; let him seek peace and pursue it”.

It is best to engage peace initiatives before a conflict explodes into violence. It is clear from our national experiences that a conflict can transform itself. Example (a) Two little boys playing in a field can lick themselves into a fight. If it is not arrested on the spot, fans from both sides can jump into the pitch and from the play ground into the host community. Anything can happen from then on.

(b) Very often when a small misunderstanding is allowed to brew over a period of time, other negative imputes will inflate the issue into a conflict. By the time the rage is over and issues are brought to the round table for discussion, the very cause of the conflict has been submerged and may not even be mentioned.

The way things are now in our states, it will be ideal to set up crisis committees from seasoned elders whose focus is to wade into a conflict, separate the belligerent factions, study the causes and embark on resolution of the conflicts. But until peace is restored, no conflict has been resolved permanently.

We must bear in mind that a purely political or economic crisis has a short fuse and can easily burn out no matter how intense it is. On the other hand, an ethnic conflict can drag for some generations.

However a religious conflict is devastating and does not go away on its own. It seems to have a post millennial elasticity. It is like a terminal or age related disease that has no cure but has to be managed for life. Every one must put on efforts to head off a religious confrontation. It will destroy those who started it, those who fan it into flames and those who belatedly try to extinguish it. When a conflict transforms itself to incorporate economic, political, ethnic and religious dimensions then the worst has arrived. The preacher and practitioner of peace becomes an endangered specie. We must pray, act responsibly and with speed to ensure that something can be salvaged.

Secretary General, International Circle of Faith Chaplaincy Corps at the commissioning of the chaplaincy cadets in Yola on 13/06/2014.

What you can read next 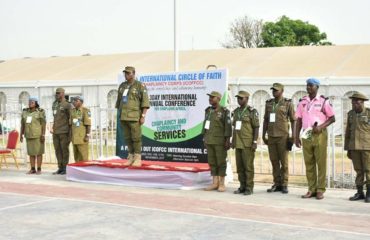 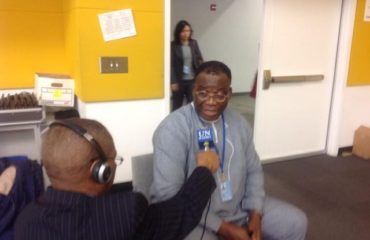